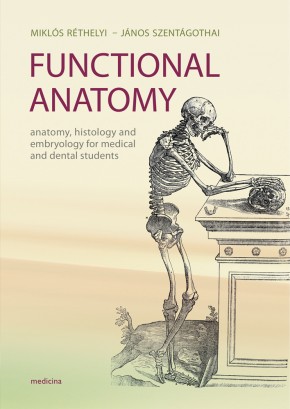 The present book is the translated and moderately extended version of the 10th Hungarian edition of Réthelyi Miklós – Szentágothai János, Functionális anatomia, published by MEDICINA in 2014. The topics of the first two chapters remained unchanged, they provide the basic elements of embryology (the events of the first 8 weeks) and of histology (fine structure of the epithelial-, connective-, muscle- and nerve tissues). The third chapter gives a short description of man in general. Bones, joints and muscles, including embryology, are described in chapter four. The presentation of the anatomy and embryology of the cardiovascular and lymphatic systems in chapter five begins with the heart and concludes with the distribution of the lymph vessels.

Anatomy text books in Hungarian have been written by eminent Hungarian anatomists since the final decades of the 19th century. The three-volume Anatomy text-book of Michael v. Lenhossék (a contemporary of Santiago Ramon y Cajal), published in 1922 was widely used for several decades. János Szentágothai, a pupil of Lenhossék both in teaching anatomy and doing research in neuroscience, earlier chairman of the Department of Anatomy, Semmelweis Medical School in Budapest, published his three-volume textbook entitled Functional Anatomy (Funkcionális anatómia) in 1971.

The subtitle of the book, Human anatomy, embryology, histology and regional anatomy (Az ember anatómiája, fejlődéstana, szövettana és tájanatómiája), reflected the integrated subject of the anatomy courses taught traditionally in the Departments of Anatomy at the Hungarian Medical Schools. János Szentágothai himself was the founder and eminent advocate of the integrated course program. His book started with the chapter of basic embryology and as second chapter, was followed by basic histology. However, anatomy, histology and embryology were combined in the classical chapters of anatomy textbooks, with chapter titles such as Bones, joints and muscles, Cardiovascular system, Splanchnology, Nervous system, Organs of special senses.

Szentágothai’s Functional Anatomy became the standard textbook in Hungary of the anatomy courses for medical and dental students. The writer of this foreword, Miklós Réthelyi, former head of the Department of Anatomy, Histology and Embryology at Semmelweis University (1994-2004), took part in the preparation of the Functional Anatomy from the very beginning, and gradually, in the course of the subsequent editions, he became the co-author of the book. Since the decease of Szentágothai (1994), he has become the only author of the later editions that kept the original title and the authors of the previous ones.

Instead of systemic description as organs of the alimentary tract, respiratory organs, organs of urinary tract, etc., splanchnology is presented in regional arrangement. Organs of the head, the neck, those of the thoracic and abdominal cavities, pelvic and perineal organs follow each other in chapter six. Each sub-chapter starts with embryology, based on the basic embryology, presented in the first chapter of the book. The anatomical demonstration is followed by the description of the microscopic structure of the organs. The parallel and interrelated development of organs with close topographical relations nevertheless of different visceral systems – e.g. esophagus and trachea, or rectum and urinary bladder – served as justification for placing the embryology at the beginning in the sub-chapters. The organs of the central and peripheral nervous systems are designated in chapter seven. The final, the eighth chapter contains the organs of special senses, as olfaction, vision, hearing and equilibrium.

The chapters are illustrated with light- and electron microscope level illustrations of histological preparations and with numerous schematic diagrams.

The substantial and continuously growing number of foreign students in the English language programs of the Hungarian Medical Schools prompted the initiative to provide an English language text-book reflecting the local traditions in Anatomy courses.

The unceasing and professional expertise of György Somogyi MD, Associate Professor of Anatomy in reading and correcting the text is highly appreciated.